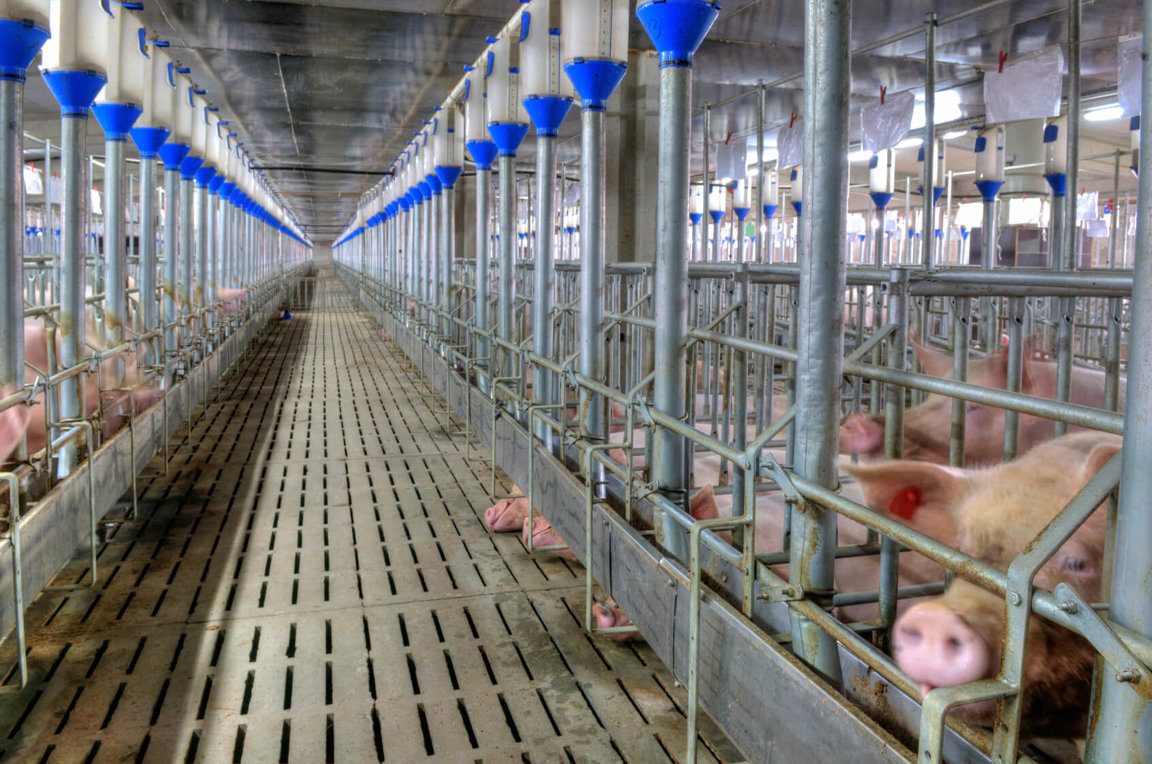 Only pigs in movies spend their lives running across sprawling pastures and relaxing in the sun. On any given day in the U.S., there are more than 65 million pigs on factory farms, and 110 million are killed for food each year.
Mother pigs (sows)—who account for almost 6 million of the pigs in the U.S.—spend most of their lives in individual “gestation” crates. These crates are about 7 feet long and 2 feet wide—too small to allow the animals even to turn around. After giving birth to piglets, sows are moved to “farrowing” crates, which are wide enough for them to lie down and nurse their babies but not big enough for them to turn around or build nests for their young.
Piglets are separated from their mothers when they are as young as 10 days old. Once her piglets are gone, the sow is impregnated again, and the cycle continues for three or four years before she is slaughtered. This intensive confinement produces stress- and boredom-related behavior, such as chewing on cage bars and obsessively pressing against water bottles.
After they are taken from their mothers, piglets are confined to pens until they are separated to be raised for breeding or meat. Every year in the U.S., millions of male piglets are castrated (usually without being given any painkillers) because consumers supposedly complain of “boar taint” in meat that comes from intact animals. Piglets are not castrated in the U.K. or Ireland, and the European Union is phasing out the practice by 2018.
In extremely crowded conditions, piglets are prone to stress-related behavior such as cannibalism and tail-biting, so farmers often chop off piglets’ tails and use pliers to break off the ends of their teeth—without giving them any painkillers. For identification purposes, farmers also cut out chunks of the young animals’ ears.
Farms all over North America ship piglets (called “feeder pigs”) to Corn Belt states such as Illinois and Indiana for “growing” and “finishing.” When they are transported on trucks, piglets weighing up to 100 pounds are given no more than 2.4 square feet of space.
Once pigs reach “market weight” (250 to 270 pounds), the industry refers to them as “hogs” and they are sent to slaughter. The animals are shipped from all over the U.S. and Canada to slaughterhouses, most of which are in the Midwest. According to industry reports, more than 1 million pigs die en route to slaughter each year. No laws regulate the duration of transport, frequency of rest, or provision of food and water for the animals. Pigs tend to resist getting into the trailers, which can be made from converted school buses or multideck trucks with steep ramps, so workers use electric prods to move them along. No federal laws regulate the voltage or use of electric prods on pigs.
A typical slaughterhouse kills about 1,000 hogs per hour. The sheer number of animals killed makes it impossible for pigs’ deaths to be humane and painless. Because of improper stunning, many hogs are alive when they reach the scalding-hot water baths, which are intended to soften their skin and remove their hair.
Because crowding creates an environment conducive to the spread of disease, pigs on factory farms are fed antibiotics and sprayed with huge amounts of pesticides. The antibiotics and pesticides remain in their bodies and are passed along to people who eat them, creating serious health hazards for humans. Pigs and other factory-farmed animals are fed 20 million pounds of antibiotics each year, and scientists believe that meat-eaters’ unwitting consumption of these drugs gives rise to strains of bacteria that are resistant to treatment.
Each factory-farmed pig produces about 9 pounds of manure per day. As a result, many tons of waste end up in giant pits, polluting the air and groundwater. According to the Environmental Protection Agency, agricultural runoff is the number one source of pollution in our waterways.
WHAT YOU CAN DO
Stop factory-farming abuses by supporting legislation that abolishes intensive-confinement systems. Reduce or eliminate pork from your diet.